Hello everybody! Guess what? We are BACK. Sorry it took so long, as it has taken a while to catch up on everything. Besides the fact, welcome back to our New Movie Show. I have been catching up on a great slew of movies over the holidays, so be prepared. To get back in the groove, let’s start off with Star Wars: The Force Awakens. 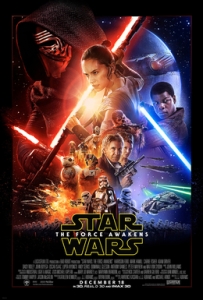 Luke Skywalker has vanished. In his absence, the sinister First Order has risen from the ashes of the Empire and will not rest until Skywalker, the last Jedi, has been destroyed. With the support of the Republic, General Leia Organa leads a brave Resistance. She is desperate to find her brother Luke and gain his help in restoring peace and justice to the galaxy. Leia has sent her most daring pilot on a secret mission to Jakku, where an old ally has discovered a clue to Lukes whereabouts.

It is about time that the newest film to enter the Star Wars saga has been released…but was it worth it? For the most part, yeah…The Force Awakens was a good time at the cinema. I thoroughly enjoyed all of the homages to the original saga, as The Force Awakens seemed very similar to A New Hope. The new cast is for the most part likeable, except we won’t be able to replace Han Solo (Noooooo!) even with Rey. The lightsaber duels actually came across slightly subpar to that of previous films in the saga, but were enough to still be enjoyable. Am I pumped for Episode VIII? Hardly. Although I will still end up seeing it.

Even though I don’t normally like to fall into the crowd with the rest of the Star Wars fans, most of my gripes are the same as with the masses. I disliked Kylo Ren so much as a villain that I felt like the characters were never ever in any real danger. Kylo Ren was just a dysfunctional and emotional brat that would throw unnecessary tantrums in order to get his way.  While this did lead to some pretty entertaining and interesting moments, I felt it could have been easily left out. Now let me address the bullshit “deus ex machina” at the end of the film. *SPOILERS* R2-D2 waking up at the end of the film was complete bullshit. How convenient that he would wake up, which seemed random to begin with, right when they needed the remaining piece of flight map data. It screamed “Quick! We need to wrap up this Skywalker hunt in the last five minutes of the movie!” J. J. Abrams…what the hell.

Top 10 Movies of the 2010s: Changing the Landscape of Film Forever

0 thoughts on “Star Wars: The Force Awakens: The Skywalker Mystery”