Hello everybody! While this is not necessarily an anime in the traditional sense, I wanted to include it in this week’s club regardless. This time we have The Chronicles of Riddick: Dark Fury.

THE CHRONICLES OF RIDDICK: DARK FURY 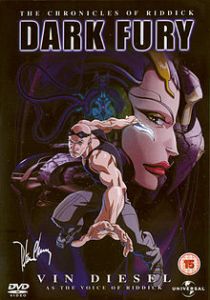 Shortly after escaping the planet from Pitch Black, Riddick, Jack, and the Imam are picked up by a Mercenary spacecraft. Although Riddick attempts to conceal his identity from the mercenaries by impersonating William J. Johns (in Pitch Black) over the intercom, they quickly voice-print and identify him.

Captured by the mercenaries, the trio of survivors discover that their captors have unusual plans for them. The ship’s owner, Antonia Chillingsworth, collects criminals, whom she freezes and keeps as statues that are, in her view, art. Although the criminals are frozen, they are alive and conscious. To her Riddick is the ultimate “masterpiece” for her collection. Riddick, Jack, and Imam must fight their way through the army of human and alien creatures at her disposal or they will meet a fate crueler than death.

It’s time to face off Dark Fury. Is there anything I actually like about you? A few things, but very little.  Set right after the events of Pitch Black, Dark Fury does feature the return of the main cast, voicing their respective characters from the previous film. I strongly believe that they regret it now, but that is beyond the point. The only other positive I would like to point out is the animation style. I am not particularly a fan of its crudeness, but it seems thematically appropriate for the Riddick universe.

Now this is going to be fun. Dark Fury, what was the reason you were made? First of all, the film is only about 30-40 minutes long, so it would have been easily classified as an original video animation (OVA) instead of a film. Definitely not a surprise that it went straight to DVD. The encounter seems random in the series timeline, as it doesn’t necessarily make any significant on the story as a whole excluding Jack’s character development. As I mentioned above, I was not a fan of the animation style one bit. Even though it was thematically appropriate, it just appeared crude and amateurish. Sorry for not liking your work, the great Peter Chung. Maybe next time.