Hello everybody! Here is my review for the popular indie game:

TITLE: I Am Alive

Alright, here is how I got into the game, I Am Alive. When it first came out, I tried the game briefly on a friend’s PS3. I thought “Okay, this is pretty cool. I will have to pick it up when I get paid.” Surely enough, I totally forgot about it until a few months ago. My little brother decided to download the game on a whim and I finally had the chance to play. I actually just finished it yesterday (it isn’t a very long game, but priorities) so this review is going to be fresh.

I Am Alive follows the story of our unnamed protagonist who is a survivor of a major cataclysmic event simply called “The Event”. “The Event” destroyed most of the world, causing many of the survivors to go without many resources needed to survive. Our protagonist is simply a man trying to find his family in the midst of the chaos. When he mistakes Mei for his daughter, he has someone more immediate to take care of and has gotten himself into another world of trouble.

I Am Alive is an interesting game to be sure. A very sad game to be more specifically. My favorite part of the game is the ending. ***WARNING SPOILERS FOLLOW*** Throughout the game, our protagonist videotapes his adventures so his family can see what he had done to find them. At the end of the game, the screen zooms out to reveal that over the entire game his wife was watching the videotapes (what we were playing through) clutching his gear. Our protagonist’s fate is unknown. I was almost at the edge of crying once I was completed. 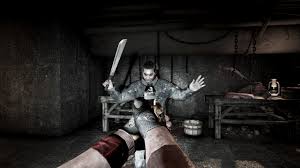 I Am Alive has quite a bit of awesome features that make it unique, but some others not so much.  My three main criticisms for I Am Alive are: lack of originality, poor game play, and outdated graphics. The game tells the very overused tale of a man looking for his family in an apocalypse. I mean, how many games/movies/television shows have done that already? The game play isn’t very exciting, confrontations and battle mechanics lack but exploration and scavenging hit their marks. While I Am Alive looks very grim in terms of the environment and gritty graphics, it is true it was outdated. I Am Alive uses a modified version of the Unreal Engine 2.5, while many other games released at the same time were already using the Unreal Engine 3 and 4.