Hello everybody! On the first installment of The Indie Shelf we have an incredibly addictive/irritating plat former Super Meat Boy. 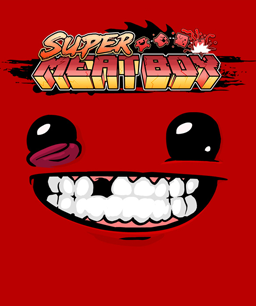 This is a platformer game in which players help an animated cube of meat (Meat Boy) rescue his kidnapped girlfriend. Players run, leap, and cling to walls throughout each maze-like level to avoid a variety of hazards (e.g., meat grinders, spinning buzz saws, propellers). Meat Boy leaves behind gooey red liquid when he lands on these hazards, causing him to disappear in a red spray of blood. Some cutscenes also depict instances of violence: Meat Boy is blown up by a rocket, resulting in cartoonlike blood; a girl stomps and dances on a character named Dr. Fetus, causing puffs of blood to appear. The game also contains an instance of bathroom humor: after a toilet gets flushed, a brown character, Brownie, emerges and emits flatulence. One cutscene also depicts a character who sticks out his middle finger.

This is a pure platformer that boils gameplay down to nothing but running and jumping. Meat Boy’s goal is always the same: he must reach Bandage Girl, who is ever in another castle. Doing so is never an easy task thanks to the numerous dastardly traps in the way. One prick from a buzzsaw, spike, or monster’s jaws will splatter Meat Boy’s bloody pixels (which remain as a grisly reminder of your failure during your next attempt). Even though you only have two maneuvers at your disposal, the developers never run out of clever ways of obstructing your path. Super Meat Boy is an extremely difficult game. Make the slightest mistake and you’ll have to restart the stage over from the beginning — there are no checkpoints. You might die a hundred times before you are finally reunited with Bandage Girl and the game gleefully keeps track of every death in the Statistics menu.

Even though this game doesn’t have a multiplayer mode, it is still very fun to play with friends. Those cut scenes I mentioned are very funny, but they don’t have the polish of the rest of the game. It is these scenes where you can tell Super Meat Boy was made by just two dudes. But I do appreciate the game’s bizarre sense of humor. I mean, it’s got a hero made of raw meat who is in love with a band-aid that is kidnapped by a fetus that won’t stop flipping people off. If that’s not a recipe for a good time I don’t know what is.