Hello everybody! Today we have a new HBO series about technology called Silicon Valley.

Richard Hendriks (Thomas Middleditch) is a shy, reclusive programmer working at a large Internet company called Hooli, while developing a music app called Pied Piper in a live-in startup business incubator run by entrepreneur Erlich Bachman (T. J. Miller). After a rocky post-TED elevator pitch of Pied Piper to venture capitalist Peter Gregory (Christopher Evan Welch), Hendriks also shows his work to a pair of brogrammers at Hooli who mock him. Within hours however, Hooli executive Donald “Jared” Dunn (Zach Woods) and Gregory’s assistant Monica (Amanda Crew) are discovering that the app contains a revolutionary data compression algorithm. Hooli CEO Gavin Belson (Matt Ross) proposes a $10 million buyout of Pied Piper, while Peter Gregory offers a $200,000 investment for 5% ownership in the company. With encouragement from Monica and the support of Bachman, Hendriks chooses Gregory’s offer. He hires the residents of the incubator to become the Pied Piper team, along with Dunn who defects from Hooli, but loses his friend Bighead (Josh Brener) to the Internet giant.

All season long, the central narrative has surrounded Richard (an increasingly winning Thomas Middleditch), the founder of Pied Piper, who rejects a multi-million dollar offer from tech titan and Hooli founder Gavin Belson (Matt Ross), to throw his hat in with oddball investor Peter Gregory (Christopher Evan Welch), who just wants a stake in the company, not entire ownership. The move is a risky one, and fuels the wrath of Gavin, who decides to reverse engineer Richard’s valuable compression algorithm, to not only beat him to market, but also make it more attractive by coupling it with his company’s Google-esque suite of services. So, it’s a premise ripe with potential but its often left spinning its wheels.

Certainly, what Judge gets right is the unique and often surreal culture of the tech world, filled by young, extraordinarily smart men who are just as socially awkward as they are intelligent. And so even in Gavin, we see someone whose quirks are exacerbated by success, such as turning to his omni-present personal guru for advice (in a running gag that’s thankfully ditched pretty fast). Or taken to further extremes by Peter, who spends a good chunk of the third episode, “Articles Of Incorporation,” obsessively studying Burger King hamburger buns (leading to an unlikely breakthrough revelation). 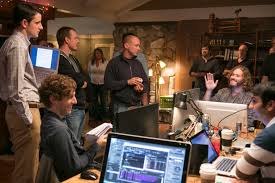 But all this is not to say that “Silicon Valley” has missed the mark. Comedies often need a season to work out their tone and find their groove, and there is plenty of promise here to suggest that with the right tweaks, the best is yet to come from this show. Key to the success thus far has been the cast themselves, with Middleditch finding that sweet spot of someone who’s both ambitious and way over their head. Miller gets some good mileage out of the aggressively self-centered Erlich, who has more than few tricks up his sleeve, and while Starr has played this kind character multiple times before, there’s few who do it better. And when the writing zeroes in on the tech industry, “Silicon Valley” delivers some very big laughs. In fact, the extended, epic inspiration handjob joke in “Optimal Tip-To-Tip Efficiency” might be the best gag “Silicon Valley” has done to date: gutbusting, crude but also whipsmart. It’s a great piece of writing with the cast nailing the moment.

You Can Still Jingle All the Way (Day #1)

Kung Fury: Because Why Not?