Hello everybody! This week’s Indie Shelf we have a psychological horror art game The Path.

The game begins in an apartment. The player is shown six sisters to choose from and is given no information about them other than a name. When the player selects a girl, the journey begins.

The player is given control of the girl, and is instructed: “Go to Grandmother’s house and stay on the path.”

As the player explores, they find various items scattered around. For a girl to pick up or examine an object, the player needs to either click on the interaction button or move her close enough for a superimposed image of the object to appear on the screen, then let go of the controls. The character will interact and an image will appear on the screen, indicating what has been unlocked; every item a girl encounters in the forest shows in some shape or form in Grandmother’s house, and some objects open up whole new rooms. Small text will also appear, a thought from the current character. Some items can only be picked up once and do not appear in subsequent runs. However, each character will say something different about an object, so the player has the option to access a “basket” to see what they have collected.

It is not required to find the Wolf. In this game, there are no requirements but the ending at Grandmother’s house does change dramatically after the wolf encounter. The girl encounters the Wolf, there is a brief cut scene, and the screen goes black. Afterward, the girl is lying on the path in front of Grandmother’s house.

The game doesn’t really try to supply any answers or spell out anything with any kind of exactitude. The point of the experience is to elicit emotion and encourage interpretation, and the manifold possibilities of such a range are reinforced by the game’s graphics and sound. Across the screen skitter bursts of images and scribbles. The color saturation of the game world is in constant flux. The sharpness fades in and out. Deep in the woods you may find the color suddenly drained from the scene, with the schizophrenic soundtrack shifting from icy piano melodies to heartbeats, the creaks of playground equipment, and furious flurries of stringed instruments. While it’s never outright frightening, there’s an unsettling quality to the presentation that succeeds in making you uneasy even as there’s no pressing threat. 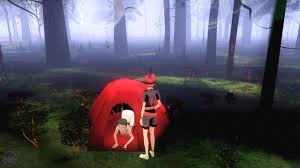 The game overall is boring, slow, pretentious. You walk along a path, moving really really slowly. If you walk for long enough, you reach grandmother’s house and the game starts over. If you walk off the path, some weird and completely arbitrary events are triggered. It’s easy to see a lot of gamers being put off by something like The Path. It doesn’t have much in the way of traditional gameplay. Really the point of running around, examining, and picking things up, which is all you do in the game, is to familiarize yourself with the mindset of each character and how they compare to each other, along with providing a kind of context for the wolf encounter. If that’s not something that sounds appealing to you, then you’re probably going to hate this game. If you’re not a fan of filmmaker David Lynch’s work, you’re definitely going to hate this game.