Hello everybody! Today we have an interesting pick, an Indonesian martial arts film called The Raid: Redemption.

In Jakarta, Indonesia, Lieutenant Wahyu organizes the invasion of an apartment building that is the safe house of the powerful and cruel drug lord Tama and his gang. The SWAT team breaks in the building but one lookout sees and warns the gangsters and the police force is trapped on the seventh floor. They learn that Lt. Wahyu has not informed his superiors about the operation. Now the police officers have to fight with limited ammunition against the armed and dangerous gangsters.

The movie gets a little slow when it settles down for some routine dialogue or plot development, but it’s never more than a couple minutes before break time is over and it’s back to the insane fighting stunts. Then again, you don’t normally watch these kind of films for plot or character development, I am here for the action. One thing I have to point out is that this film is incredibly gruesome and I am perfectly okay with that. This is just the kind of film where we watch for the blood, guts, and mayhem. 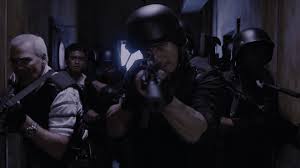 Alright, so I unfortunately was able to watch The Raid as an English Dub instead of with English subtitles like I would have liked to. The English dub is so horrible that it is completely laughable. I have seen some classic Jackie Chan films that had better English dubs than The Raid. My other major beef with the film is that the plot is incredibly lackluster. The plot is simple and contains many unnecessary twists that really serve no purpose for the film. Just focus more on what The Raid does best, Pencack Silat (Indonesian martial arts).
PROS:

Chasing Amy: Point a Guy in the Right Direction