Hello everybody! Instead of our normal anime club on Wednesdays, we have one of Pixar’s shorts, La Luna. 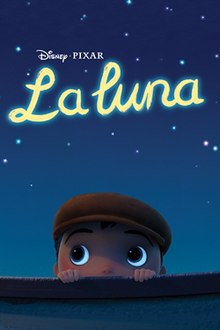 A young boy, Bambino, goes on a midnight sailing trip with his father Papà and grandfather Nonno. After they anchor their boat in the middle of the sea, Nonno presents Bambino with a cap similar to the ones he and Papà wear. The two men disagree on how Bambino should wear it, with Papà pulling it low over his eyes and Nonno pushing it back on his head. Papà sets up a long ladder for Bambino to climb so he can set the boat’s anchor on the full moon, and the three ascend to start their work of sweeping fallen stars off the lunar surface.

Papà urges Bambino to use a pushbroom on the stars, while Nonno favors a besom broom. As they quarrel, a huge star crashes down on the moon; it is far too large for any of them to move by themselves. Turning his cap backwards, the way he wants to wear it, Bambino climbs onto the star and taps it with a hammer. It bursts apart into hundreds of smaller stars, and all three go to work sweeping them to one side, with Bambino choosing a rake instead of either man’s broom. Once the job is done, they climb back down into their boat and look up at the moon, which now displays a glowing crescent phase thanks to their efforts.

La Luna is a delightfully beautiful short brought to us by the brilliant minds at Pixar. I love La Luna. After watching it, I felt empowered. I felt like I could do anything (maybe that is a stretch, but it was the closet description nonetheless). A huge plus for La Luna is the fact that it was animated by Pixar. The animation, like everything animated by Pixar, is definitely worth pointing out. The story, while being very simple, is quite satisfying.

I am actually surprised that I like La Luna so much, especially since I haven’t really liked Pixar in the past. Don’t get me wrong, I love their animation style, but never have been big on their films as a whole. The stories are too simple for me, and La Luna is no exception. I understand that they are written simple for their audience, but still. Other people besides children go to see Pixar films, how do you think the children get there?

You can watch La Luna in full below:

Chasing Amy: Point a Guy in the Right Direction

Our Oscar Picks! Bring On The Controversial 92nd Academy Awards!