Hello everybody! Sorry for the music overload, but we will be incorporating it more into our regular programming. For now, enjoy our review of Arrival.

Aliens have landed on Earth, in 12 different locations. Language professor Louise Banks joins a US army team at one of the locations, in Montana. Her job is to try to learn the aliens’ language and enable communication with them. Through regular meetings with two of the aliens she starts to compile a record of the aliens’ “language” – a series of drawn symbols. The important question is – are they friend or foe? Other nations with alien landings are starting to view them as a threat, making it a race against time as war with the aliens could erupt at any moment.

“Based on Ted Chiang’s 1998 short story “Story of Your Life” and scripted by Eric Heisserer, Arrival succeeds at adapting the complicated literary devices used in Chiang’s source material and translating them into effective cinematic storytelling techniques. Where Chiang’s original short story uses different writing styles and tenses to reflect shifts in time and setting, Arrival transitions seamlessly between the scenes set in the present-day and those where Louise is lost in thoughts/dreams (spurned on by her attempts to communicate with and understand the aliens) – using distinct visual cues and edits that smartly juxtapose the story threads; bringing out deeper meaning in both and moving them forward at the same time. Arrival, in turn, both holds its cards close to the chest throughout much of its running time and keeps viewers engaged in what’s happening onscreen in any given moment, even as they anticipate getting answers to the big questions that are raised over the course of the film. 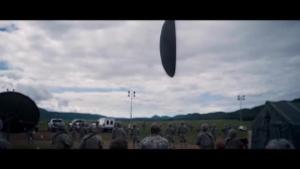 Where Arrival struggles is to occupy a comfortable balancing spot between a sentimental sci-fi movie like Steven Spielberg’s Close Encounters of the Third Kind and a more purely cerebral sci-fi drama in the vein of Stanley Kubrick’s 2001: A Space Odyssey (and the many sci-fi films that have been influenced by both Spielberg and Kubrick’s landmark work since then). While Spielberg’s own attempt to merge his style with Kubrick’s on A.I. Artificial Intelligence leaned more towards being the former, Arrival is more the latter – making the moments and scenes where it does try to pull on moviegoers’ heartstrings less emotionally impactful and feeling out of place with the rest of the film, tone-wise.”

John Wick: Keanu Reeves is Back!