So its Brandon again, still doing the majority of the reviewing for the site. I added a few contributors onto the site, hopefully they will bring some promising new opinions to the site. If you would like to write for the site, leave me a comment and we will try out a trial period or something.

Anyways, I decided to write a review on one of my favorite films, The Boondock Saints. 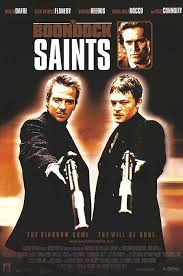 Oh, Boondock Saints, how I love this film.  The Boondock Saints is an amazing film about vigilante justice, without all of the red tape.  The film follows the story of the MacManus brothers, Connor (Sean Patrick Flannery) and Murphy (Norman Reedus, that’s right Norman before Daryl Dixon) as they accidentally murder two Russian mafia members after a bar fight the previous night.  Afterwards, they recruit their friend Rocco and begin a murder spree, solely based on whether or not they believe the victim is evil and deserves to die.  Throughout the film they are pursued by a relentless homosexual FBI agent Paul Smecker ( Willem Dafoe).

While Boondock Saints did not necessarily launch Sean Patrick Flannery’s or Norman Reedus’s careers (Dafoe didn’t need any help, he was just there gather the audiences), it definitely launched them to cult status.  Flannery and Reedus portrayed the MacManus brothers so perfectly, which is a surprise since the brothers have very thick Irish accents. It is really weird to watch Norman Reedus play Daryl Dixon in The Walking Dead now because listening to the accent and watching his mannerisms,  you still see a little bit of Murphy MacManus.

The most notable attribute of the MacManus brothers is the fact that before each “main” kill they rehearse a “family prayer”. Here is the prayer and a brief explanation:

The Boondock Saints prayer is also known as “The Family Prayer”. It is an oath to God. Basically, the Boondock Saints are saying that they will do all they can to help rid the world of evil, and help the weak.

And Shepherds we shall be

For thee, my Lord, for thee.

Power hath descended forth from Thy hand

Our feet may swiftly carry out Thy commands.

So we shall flow a river forth to Thee

And teeming with souls shall it ever be.

The final part of this prayer from the Boondock Saints is in Latin. It’s translation is, more or less, “In the name of the father, of the son, and the Holy Spirit”. The prayer was written by the director, so the meaning is up to interpretation. The only part of the prayer that appears in the bible is the last sentence.

In closing, I love Boondock Saints. I mean, Irish vigilantes killing mafia villains? Willem Dafoe  on a downward spiral (just like in every other film he is in) then ending up in drag? How can you turn that down?