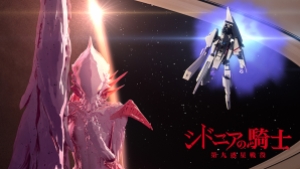 In a distant future where mankind has fled a destroyed Earth, Nagate Tanikaze has been raised apart from other humans by his grandfather, and thus has always dwelled in the bowels of a massive ship, where he trains regularly in an abandoned but still functional mecha simulator. After his grandfather’s death a shortage of food eventually forces him to the surface, where he discovers a strange reality: a highly regimented society built in the interior of an asteroid-based ship, one where people his aged are commonly trained to be garde (mecha) pilots against the possible reappearance of the Gauna, a betentacled alien foe which Sidonia (the name of the ship) has not encountered in a century but which has devastated the ship and populace in past encounters.

One of Sidonia’s leaders, suspecting the truth about Nagate’s origin, has him integrated into Sidonia’s training academy for its defense force, where he quickly proves unable to handle the newest-model garde but proves quite adept with an older one once used by a renowned hero. The timing couldn’t be better for Sidonia, as when a resource-gathering mission leads to a Gauna contact, Nagate will prove instrumental in helping Sidonia (which, as far as they know, may be the last remaining remnant of humanity) to survive. But Sidonia also has its share of deeply-buried secrets, and not everyone is necessarily happy to see Nagate succeed. 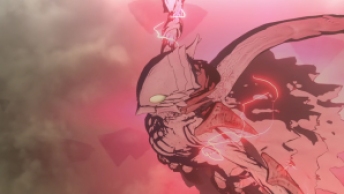 I have been waiting for season 2 of Knights of Sidonia to drop since I had an all night marathon of season 1 when Netflix released it. I was beginning to worry that Netflix was forgetting about Knights of Sidonia and it was quickly brushed under the floor boards. Luckily..it came to light!

Now lets get to the great parts of Knights of Sidonia. The series maintains the beautiful animation and design style from the first season, which I am happy that the production value hasn’t depreciated. The new characters introduced this season were actually not complete wastes of space and added a little bit of variety to the main cast. Tsumugi is obviously the most unique character added this season, since she is a Guana/human hybrid. I also want to add that there is a surprise guest towards the end of the season, but no spoilers here.

My biggest beef with this season of Knights of Sidonia is that there were a handful of filler episodes that I felt dragged down the middle of the season. It spent about three episodes developing the relationship between Tsumugi, Nagate, and Izate. I don’t necessary feel that the relationships paid off, but at the same time it was set up for the next season. It better be expanded upon.