Hello everyone, and welcome to my review of March 3rd’s edition of NXT! This week is Vengeance Week! As our advertised Main event is Bo Dallas vs. Adrian Neville(c) with the NXT Championship on the line. Will Neville be able to retain his championship in his first defense, or will Bo Dallas reclaim what he Bo-Lieves is his!

A nice short video package that highlights the rivalry between Bo and Neville. They only show the rivalry from the point when Neville defeated Bo for the title. Which is a shame, because these two have had a pretty good rivalry that has many more memorable spots!

The first match to start off Vengeance Week is Mojo Rawley and Cj Parker, who have just recently began feuding. Parker was in control for the majority of this match. He was very aggressive, which is a new thing we are seeing from him. Ever since he turned heel, he has been pretty impressive, but Mojo has remained impressive! He has gotten over so quick with the NXT Universe and is quickly becoming one of the most popular faces on their roster. I sure hope his ring skills improve soon though, because its not hard to tell that Mojo is still very green. There is a reason why he is beaten up for most of the match, just to come back in hit his 4 moves of doom! Cj controls majority of the match, but is caught of guard by Mojo at one point and this leads to him getting hit with Hyperdrive to give Mojo the win with the three count!

Rating- 4/10: The match itself wasn’t bad in the way of botches or anything, but bad in the way that is starting to get repetitive seeing Mojo win his matches the same way every single time! I really feel this rivalry will help benefit both men, especially Cj. My only hope is that its not a one sided feud and Cj just loses everytime!

We are shown what happened last week when Sami Zayn was set to face Tyler Breeze! While Zayn was making his entrance Corey Graves ran out from behind and tosses Sami face first into the steel post. Than we are shown a video from last week of the doctor checking on Sami. Basically for the next couple minutes both the doctor and Sami state numerous times that Sami is alright!

At NXT: Arrival these two men were supposed to face off, but an interference by Alexander Rusev, ended the night early for both men. Woods wanted revenge, but so did Breeze, and when Woods didn’t leave the ring and let Tyler Breeze get his revenge on Rusev, well than Tyler took it out on Xavier and cost him his match against The Bulgarian Brute. Now Xavier is looking for some vengeance in this match! I’m really excited for this match! I don’t know why, but I really feel Woods and Breeze and put on a great match together, and tonight they proved that! Its very rare we get to see Breeze’s move set, and tonight was one of those rare nights! Breeze’s character as a model really prevents him from showing off his stellar in ring work, but tonight he held nothing back, as he was very aggressively offensive! Woods to manage to battle back and hit Breeze with a hard hitting Shining Wizard. Woods shouted “It’s Morphing Time” as he set up for The Honor Roll, but Breeze crawled out of the way and was able to catch Woods off guard with The Beauty Shot and covered him for the three!

Rating – 7\10: These two put on a great match here tonight! We got to see a different side of both men as they displayed more of a vicious side! I’m not to sure if this rivalry will continue, but I for one honestly do not mind, because it would appear Woods and Breeze have great chemistry in the ring together!

Devin Taylor is backstage ready to interview the former NXT Champion and challenger for the title tonight, Bo Dallas. They talk briefly about the title match tonight. Bo heavily highlights the fact that Neville did not beat him for the NXT Championship and that he simply climbed up a ladder and unhooked it, he is also glad he is not in a jungle gym match tonight and promises he will walk out as NXT champion and that we better Bo-Lieve that!

This match wasn’t announced for Vengeance week, but I think its a welcome addition. We spoke earlier about the budding rivalry between Sami Zayn and Corey Graves, but that actually all began with a match with Yoshi Tatsu. Tatsu has definitely been pushed to the side and only used as the first step in the rivalry, but tonight Yoshi looks to get his revenge in this match, and I gotta say I’m so glad they allowed Yoshi to put up a fight against Graves, and it just wasn’t a one sided beat down. There are superstars who fit the name jobber so well because they really don’t have that much talent. Superstars like Camacho come in mind to me, Yoshi Tatsu does not. There is a fine difference between Jobber and enhancement talent. Yoshi is a very talented wrestler who just can’t connect with the audience or just has not been giving the opportunity to, but that still doesn’t mean we can’t use his in ring talents, and that is what enhancement talent is. A superstar who can make the guy look good and not be affected by losing so often. Anyone, after a long rant about Jobber’s and enhancement talent, we finally will talk about the match! Early on Graves to control, but surprisingly Yoshi fought back and took it to Graves, but Corey was to much for Tatsu and was able to weaken his legs enough to force him to tap up to Lucky Number 13. After the match was over Graves got on the mic and told Sami Zayn to stay down the same two words tattooed on his knuckles!

Rating – 5\10: Tonight was all about making Graves look good, and that is exactly what they did tonight. They heavily promoted his attack on Zayn, and than gave him a good match against Yoshi that allowed him to show off his talents, and nice promo at the end really helped further the feud between Zayn and Graves. My friends I honestly think were looking at the Next NXT Champion!

This is a match I’m very excited about for many reasons. One is just because of the legacy of there families, both the Harts and the Flairs, and than of course their rivalry has been very entertaining as well as Charlotte’s new bad girl character! Hands down this has to be one of the best divas matches I’ve seen in a long time! Its a shame the NXT Womens division is considered the number two division, because these women can fight, I just wish WWE would allow them to show off their skill sets more often and not just their assets. I really didn’t know Charlotte had it in her, I thought she was very green, but she went out there and stole it with Nattie. The two divas countered each others moves, and Charlotte showed off her gymnastics many times through out the match, even used it as a way to evade the turnbuckle, but the second she came down she was hit with a  Discuss Clothesline from Nattie. To end the match Charlotte looked to lock in the submission move made famous by her father, The Figure Four Leg Lock, but Nattie had other plans as she turned the Figure Four around for a Sharpshooter, it looked like Charlotte was about to tap, so “The Boss!” Sasha Banks ran in and attacked Nattie causing a Disqualification. Sasha soon paid for her attack though as Nattie locked The Boss in the sharpshooter and than celebrated with Uncle Bret!

Ranking – 8\10: These two women put on a great match! I really hope they end of doing a Three Way for the Title and add Nattie into the mix, because I think Natalya vs. Charlotte vs. Paige(c) for the NXT Womens Championship would be a great Triple Threat match that can show case all three women and is able to get the belt around Charlotte’s waist! I feel once Charlotte gets the belt, we will see Paige and Nattie fight to earn a shot and than get to see some great matches between these woman. Either way I’m excited!

A short interview with Neville. They talked about the match tonight, and how this one was Not a Ladder Match! Neville says the dynamic of the match has changed but the outcome won’t.

Its not time for our main event, and it is for the NXT World Championship. At NXT: Arrival Adrian Neville defeated Bo Dallas for the NXT Championship in a ladder match, and tonight Bo cashes in his rematch clause and hope to bring the title back home with him. The rivalry between these two have been great and so have the matches, and I think tonight’s match was the best out of all them! We saw a more aggressive side out of Bo here tonight, as he hit Neville with numerous hard hitting clotheslines and never let the man breath. Bo has made it clear that he Bo-Leives that the only reason Neville won, was because it was a ladder match, and in the early going in the match, he showed that he was a better wrestler than Neville, but Neville fought back and hung in there. Despite how hard Adrian got hit he kept kicking out witch just frustrated Bo more. Neville did attempt The Red Arrow on two different occasions, but Bo rolled out of the way for the first one and got his knees up for the second one, witch led to a very close three count! The ending sequence was well done as each man reversed each others moves until Neville got off one great Super kick and this set Bo up for Adrian’s new move! The 450 Splash, and may I say this has to be one if not the most impressive 45o I’ve ever seen. Neville covers Bo for the three!

Rating – 8\10: Tonight both men went out there and showed why they are and were NXT World Champion. I like the new aggressive side to Bo and I’m really interested to see where things go from here. Things aren’t quite down with Graves and Zayn, so I expect Neville and Bo to continue their rivalry, but I fear it might get a little Bo-Ring if they keep it going on. I think whats best for both men is two have one more match, and end it there!

Superstar of the Night: Corey Graves Even though Neville and Bo put on a great match and Graves was only in action against Yoshi Tatsu, I still feel like Corey Graves deserves to be superstar of the night. It is clear that Graves is being built up for big things in NXT, and I expect him to be the man who defeats Neville for the title, but tonight they made sure to make Graves look like a threat. The injury at the hands of Corey Graves to Sami Zayn last week, cost Zayn this week and despite Yoshi’s best effort, he could not defeat Corey Graves. Big things are coming for Graves and the best advice I can give the NXT Locker Room is tattooed on Corey’s knuckles, “Stay Down” 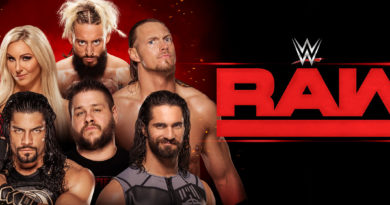