Hello everybody! Back with yet another interesting film about cheating husbands and how they affect their lives with The Loft. 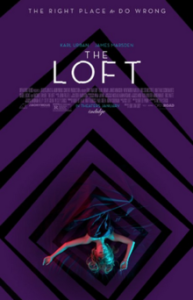 Five married guys conspire to secretly share a penthouse loft in the city–a place where they can carry out hidden affairs and indulge in their deepest fantasies. But the fantasy becomes a nightmare when they discover the dead body of an unknown woman in the loft, and they realize one of the group must be involved.

I didn’t expect so many twists and turns. Just when I thought I had it figured out, they proved me wrong. That actually happened quite a few times. The cast that they assembled was awesome. You were treated to so many different types of personalities that it stayed fresh through out the entire film. Talk about five totally different characters that worked splendidly well together.

For the most part, the film has a nice set up. However, from the first few minutes, this neat set-up falls victims to the movie’s fatal flaws. First of all, there’s a problematic chronology in the film. The movie starts with the ending scene, only to reveal a “Earlier this morning…” title card to bring us back to the discovery of the body. Then, we have all the men in the police station being questioned by detectives. Soon, this flashback-within-a-flashback starts flashing back further to the backstory of the loft and the men involved.