Hello everybody! On this week’s The Indie Shelf, we have the fun survival zombie game State of Decay.

State of Decay is designed to let zombie fans answer the ultimate question: What would you do in the face of the zombie apocalypse?

The end is here. Human civilization has been annihilated. The few, scattered survivors must band together, rebuilding civilization in a third- person action game packed with sweet guns, fast cars, hand-to-hand combat, and copious amounts of zombie gore. Players choose where to make their stand, designing and fortifying their settlements, performing daring raids for valuable stores of food and ammunition, and rescuing other playable survivors. The open world develops in real-time, shaped by player actions, with content determined by their choices and the ever-increasing zombie threat.

State of Decay has to be one of the funniest games I have played all year. I was initially extremely excited for the release last year, but it fell off of my radar until a couple of months ago. I beat State of Decay’s main story after a couple of days, but realized there was so much more to play! I’m still making my way trying to recruit other survivors and exploring areas(I don’t think there are anymore building materials on my map left.) State of Decay has plenty of replay value since you can play with so many different characters and play the story differently.

The whole point of State of Decay is just like all other zombie games, pure animalistic survival. While State of Decay does have traditional elements, it tries to add just enough to make itself unique. The game completes this by setting the game in an interesting open world and by focusing on time/character management. Management is key for survival in State of Decay. Sure, you can use only one character for the majority of the game, but when he/she is hurt/tired, who are you going to use next? 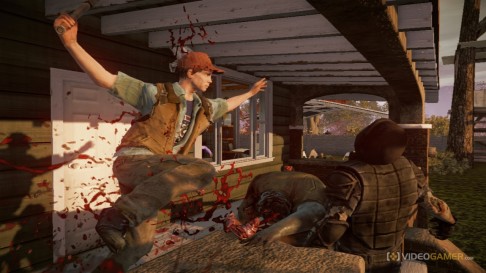 While State of Decay is an incredibly fun game, I still have plenty of gripes about it. This game is buggy as all hell (which is to expect from an indie game, even if it is from the minds at Zombie Labs). Zombies glitching through walls/fences, randomly spawning in my home, and one hit kills with full health. It is actually becomes pretty irritating as the random survivors I keep saving just randomly die. What the hell? Also, the “allies are in trouble” filler quests are getting consistently annoying. Its the same shit over and over.

The Indie Shelf: The Path