Here is my review of last summer’s blockbuster hit The Dark Knight Rises. I didn’t see the film on its original theatrical run, but I decide to watch it on a whim.

Everybody ready? Okay. First we had Batman Begins where Batman (Christian Bale) takes on Scarecrow and Ra’s Al Ghul. Next we had The Dark Knight where Batman took on his most notable villain, The Joker (Heath Ledger). In this final film of Christopher Nolan’s impressive Batman series, Batman faces another notable villain named Bane. Bane is most famous for temporarily paralyzing Batman by snapping Batman’s back over his knee. 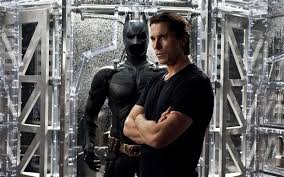 The Dark Knight Rises is set eight years after the events of The Dark Knight. At this point in time, Batman is nothing but a pariah of Gotham and Bruce Wayne has become a social recluse. Many people don’t even believe that Bruce Wayne is even still alive. After Bruce’s mother’s pearls are stolen by Catwoman (Anne Hathaway), Bruce is convinced to get back in the game. As a result, Alfred (Michael Caine) leaves in order to not have to suffer in Bruce dies. After an attack on the stock exchange by Bane, Wayne Enterprises is in shambles and Bane has declared martial law. What will Batman do? You will have to watch it to find out, even though you probably already have

The Dark Knight Rises has many redeeming characteristics that definitely make it a decent movie. Batman, Bane, Catwoman, and John Blake are all interesting and complex characters that are fun to watch on screen. It wasn’t just the characters that make it a decent film though. The VFX of the film are impressive, just like every other Christopher Nolan Batman film. I was very surprised how well they included the “breaking the bat” scene that is so famous from the comics, even if they didn’t follow Bane to his comic origin that much, but I will get to that later. 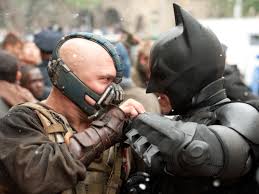 There are many faults though that hold The Dark Knight Rises back and makes The Dark Knight the best of the trilogy. In my opinion my main issue with the film is Bane. Bane was more of a druggie in the comics, his mask having to pump Venom into his body. Also, his whole “evil maniacal plan” doesn’t make any sense if you think about it. Bane is trying to bankrupt Bruce Wayne, causing him suffering. His plan goes like this:

The main problem here is that once Bane attacks the stock exchange, all trading would stop. Even if the trades got through, buying puts on futures would protect Wayne Enterprises from loss. Bane, what the hell?!?!

John Wick: Keanu Reeves is Back!

Circle: A 50 Person Free For All