Alright, Branded is one of those films that has been sitting in my Netflix queue for a long time. I decided to watch it after I checked out Equilibrium. Here is my review:

Branded is definitely a weird film. Branded is very interesting yes, but it definitely makes your mind work. The film originally begins in Moscow, following a young marketing genius named Misha. He is employed by a large marketing firm that is in charge for the marketing of many large corporations. After the star of a cosmetic Nip Tuck kind of show falls into a coma, Misha and his corporation becomes under fire. Misha leaves the city and is convinced in a dream to perform a ritual. When he returns to Moscow, everything changes. 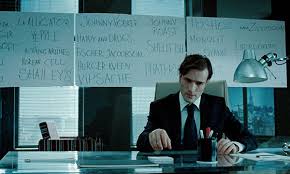 Branded is a very confusing film. While the film is considered to be about advertisements, brands, and marketing, the film makes a surrealist turn about halfway through the film. The characters are all entertaining to watch, Misha’s decent into madness is interesting and Abby’s American outlook into the situation gives another view on the situation. Easiest way to explain it is just to tell you to watch the film.

This film is definitely not for audiences who can’t understand surrealist films. Branded is a surrealist look at the world of brands and I suggest that everyone watches it at least once.