Hello everybody! Here is my review for the final film in the Cornetto film trilogy, The World’s End. 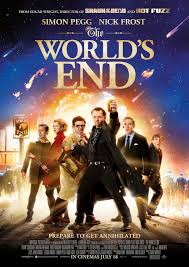 The World’s End follows six friends as they try to complete the “Golden Mile”, a twelve pub pub crawl in their hometown of Newton Haven. The group attempted the crawl as teenagers over 20 years earlier, but failed to reach the final pub, The World’s End. The group includes Gary King (Simon Pegg), Peter Page (Eddie Marsan), Oliver Chamberlain (Martin Freeman), Steven Prince (Paddy Considine), Andy Knightley (Nick Frost), and Oliver’s sister Sam Chamberlain (Rosamund Pike). When they return to the town, they discover that the townsfolk have changed into higher beings and try to replace them.

I have been waiting for The World’s End to be released. The film plays on the strengths of all of their actors and there is some comedy gold between them. Then again, it is always comedy gold when Pegg, Frost, and Wright get together to make a film. There are many reoccurring motifs in the film that are also quite hilarious. For example, Gary King’s thin understanding of what the acronym “WTF” means. The film also deals with the struggles of maintaining friendships.

I was slightly disappointed in the third act of the film, most particularly the ending. I don’t want to spoil too many things for you, but it makes a complete 180 degree turn and becomes a definite end of the world scenario. While that is normal for the Cornetto films, it was still disappointing at how big of a turn they made. They did wrap up Andy and Gary’s friendship struggles quite well though, and the epilogue of the film makes up for the climax.

You can check out the trailer below:

0 thoughts on “The World’s End: Best Pub Crawl Ever”