Hello everybody! For this week’s anime club, we have another Netflix adaptation for The Seven Deadly Sins. 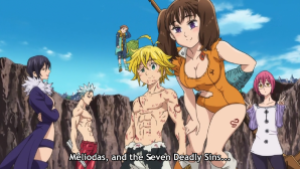 The Seven Deadly Sins were once an active group of knights in the region of Britannia, who disbanded after they supposedly plotted to overthrow the Liones Kingdom. Their supposed defeat came at the hands of the Holy Knights, but rumors continued to persist that they were still alive. Ten years later, the Holy Knights staged a coup d’état and captured the king, becoming the new, tyrannical rulers of the kingdom. The third princess, Elizabeth, then starts out on a journey to find the Seven Deadly Sins and enlist their help in taking back the kingdom.

With a plot centered on a holy war; every episode contains an epic battle between our unlikely heroes and their deadly foes. This anime is fast paced. Battles are not dragged out over countless episodes leaving the viewer with a nasty cliffhanger and a feeling that the plot really didn’t go anywhere. Each member of the Seven Deadly Sins is a criminal with a personality matching that of their designated sin so as you can imagine, everyone is hot headed and ready for combat.

This show is deceivingly grim. The art style is very cutesy, the characters very young, and of course there is a talking piggy sidekick. So at first glance one would assume the show was meant for a more youthful audience. However there is no scarcity of blood and the antagonists are ruthless. The holy knights have no sense of morality. Imbued with the blood of demons, they pursue the seven sins obsessively trying not to just capture them but to end their lives. Their undertaking leads to the death of countless innocent men and women. Even our heroes have a dark side. The title of wrath, envy, sloth, greed, etc. comes from a singular transgression that the individual character committed in their past and the viewer is slowly introduced to these sub layers throughout the season.

This was a manga adaptation that had a goal in mind as to where it wanted to finish in the source material and it did everything it had to in order to get there. Normally this can lead to some questionable adaptations (like say Deadman Wonderland), but in this case it worked out fine. Any changes made compared to the source material in my view were minor while they still managed to hit the key points in spectacular fashion. In terms of adaptations I’d consider this a pretty strong one.

Anime Club: Welcome to the NHK