Hello everybody! Today we have one of Edward Norton’s best performances, 25th Hour. 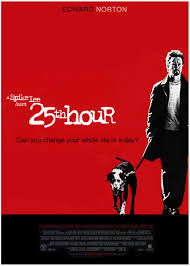 Monty Brogan is about to start his last day of freedom before turning himself into the authorities and serving a seven-year term for drug dealing. He’s a charming young man who had always dreamed of being a fireman, following in the working-class footsteps of his father, who has had to put up his bar in Queens as bond so that his son can stay out of jail until his sentence begins. Monty, named for Montgomery Clift, does not know how he managed to get himself into this predicament. It was easy money and it carried so many perks, and you’ll feel more than a little sympathy for this young man who has managed to kill his own dream for courtside seats at Madison Square Garden. But before he goes to prison, Monty wants to have one last night out on the town with his two best friends. Frank Slattery is a bond trader, one of the best and most successful risk takers in a very risky business. The other is Jakob Elinsky, an English teacher who envies his friends’ lifestyles but who has no intention of ever giving up his job for the easy money, despite the disillusionment of teaching high school students in a tough school. The three young men enjoy the night into the early morning as they eat, drink, and visit the hottest spots in town. It’s a sad night for Monty, but he has a plan that neither Frank nor Jacob know about–and it makes for a shocking ending to this brilliant and disturbing story.

While 25th Hour isn’t exactly the film I thought it was, it definitely was a good film. Edward Norton is absolutely phenomenal as … His performance was so amazing on screen that I almost forgot he was only acting. The film dives into these characters and makes me care for them sooo much that I feel like I have known them forever. This is definitely 25th Hour’s strong point. I also admire the way they incorporated the September 11, 2001 attacks into the film (since it was released 15 months after the attacks). They center the remains of the structures in the background during a pivotal scene about freedom during the film. 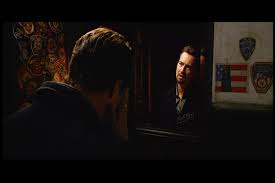 Besides everything that I listed above, the film had many drawbacks. I have to mention the film’s pacing. The film was insanely too damn slow! I have never wanted a film to speed up and end more than this one. It was ridiculous! I felt like that I actually spent his whole last 24 hours with him. The film could have been cut down easily. Just on a side note, I wasn’t impresses with any of the other actors except for Edward Norton and Rosario Dawson. If the rest of the cast actually performed like they should have, then maybe I would have liked the film more.

Requiem for a Dream: Drugs and Depression