Hello everybody! Today we have the latest film in the X-Men franchise, X-Men Days of Future Past.

X-MEN DAYS OF FUTURE PAST

Sentinels, robots that were created for the purpose of hunting down mutants were released in 1973. 50 years later the Sentinels would also hunt humans who aid mutants. Charles Xavier and his X-Men try their best to deal with the Sentinels but they are able to adapt and deal with all mutant abilities. Charles decides to go back in time and change things. He asks Kitty Pryde who can send a person’s consciousness into the person’s past to send him but she can only send someone back a few weeks because if she sends someone back further it could harm them. So Logan decides to go back himself because he might be able to withstand it. So Charles tells him that it’s Mystique who’s responsible because when she learned about the Sentinels she sought out Bolivar Trask the man who created them and killed him. She would be caught and studied and her ability to change was somehow added to the Sentinels which is why they can adapt. Logan must go to the younger Charles and ask him to help; problem is that he was despondent at that time and without his powers because he took a drug which allows him to walk but takes away his powers. Logan is also told to find Magneto.

This film has the same well-crafted flow of most of its predecessors, the same (often) noble superhero exploits and electrifying spectacle, the same (subtle) plugs for tolerance and human evolution. It has a recognizable struggle between Professor X and his longtime friend/nemesis Magneto. As their younger selves, the two metaphorically arm wrestle once again over the good and evil in the hearts of men.This X-Men incarnation, however, also boasts the elusive and curious element of time travel. It’s an inclusion that gives the comic-book-based romp an even more sci-fi, Matrix– and Terminator-like feel. With ticking-clock urgency we jump back and forth between the past and the future to see how each alternate world’s events unfold and how actions will impact the present. The right choice made long ago, after all, might just erase evil decisions, give the dead new life and change a universe for the better. 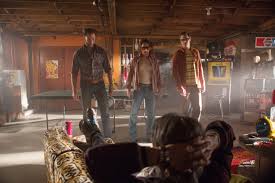 Most of the mutants in the future are little more than action figures. They fight with glorious displays of power, but you won’t learn a thing about Blink (Fan Bingbing), who is like a human version of the game Portal, or Warpath (Boooo Stewart), who tracks people, or something.  The run of Marvel Studios films has conditioned us to expect a strict sense of continuity from one film to the next. The X-Men movies, however, tend more to live in the moment, disregarding hardcore continuity rules in order to tell whatever story is at hand. From time to time Days of Future Past is intent on dealing with some continuity questions created by previous films. But once this film is over, serious trainspotters might spend weeks talking about a few issues.

One thing bugs me about the ending, and to reveal the problem would be a spoiler. I’ll say simply that the end of this film nearly invalidates the emotional victories of at least one other movie in this series. The trade-off? A gain that is significant in a certain sense, but raises questions when considered across the span of the X-Men series.

Oz: The Great and Powerful

Avengers Age of Ultron: Round 2!

One thought on “X-Men Days of Future Past: What is No Longer Canon?”