Hello everybody! I swear I have never felt so productive after this week. I should have plenty of reviews for the next few weeks, so pay attention.

Warm Bodies is a hilarious zombie/romantic comedy that stars Nicholas Hoult, Teresa Palmer, Dave Franco, and John Malkovich. The film is an expert blend of the zombie and romantic comedy genres, while going a little bit ridiculous on both ends.  Nicholas Hoult plays R, a zombie who spends his days aimlessly shambling around an airport with the rest of the undead.  Out on a supply run, Julie Grigio (Palmer) and her boyfriend Perry Kelvin (Franco), as well as the rest of their group, are attacked by R and other zombies. After murdering Perry, R eats his brain and he falls in love with Julie.

Most of the logic in this film is stretched pretty thin, but there doesn’t have to be that much logic in a rom-com nowadays anyway right? I mean in Warm Bodies they have zombies speaking broken English, having feelings, being capable of kidnapping, and driving cars. At least all of these ridiculous antics are highly enjoyable to watch.  In my opinion, the best line of the film is when R accidently crashes a very nice luxury car, and Julie says “Come on R, this used to be such a nice car!” One of the best scenes in the film is when Julie compares R to the Dawn of the Dead zombie. 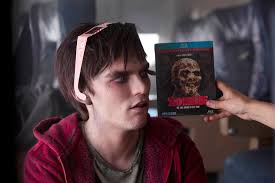 In my opinion, Warm Bodies is such a hit because R is very relatable to many people in my age group. R and Julie’s relationship shows that awkward, mostly rocky beginning to relationships that we pay to go see in romantic comedies so we don’t have to feel so shitty about our relationships in our own lives.  The whole time I was watching Warm Bodies, I kept leaning over to my friend that I was watching with and pointing out how this film is about her and her complicated relationship.

ARVE Error: id and provider shortcodes attributes are mandatory for old shortcodes. It is recommended to switch to new shortcodes that need only url

Overall, Warm Bodies is a hilarious, over the top, good time.

Jurassic Park: Where It All Started.

0 thoughts on “Warm Bodies, Time for a Zom-Rom-Com!”