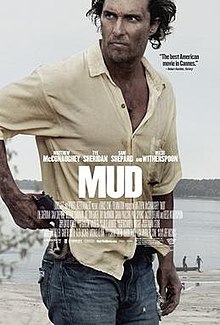 Alright, hello everybody. I had a film marathon last night so you will be getting some more film reviews over the next few weeks.

So here is the story of how I came across to watching Mud. I went to the store and decided to Redbox a couple of movies for our weekly movie night.  I don’t like Matthew Mcconaughey (except in Reign of Fire) but the cover looked interesting so I decided to pick it up. Once I got back home, I checked out Mud’s IMDB page and read the genre as a “Coming of Age Comedy”. As I started watching the film, I was wondering where the comedy was and double checked. It was a coming of age drama. Damn. Oh well, I watched the whole thing and it wasn’t bad….

Mud follows the story of Eliis (Tye Sheridan) and Neckbone (Jacob Lofland), two kids living in Arkansas near the Mississippi River. Out on the river one day, Ellis and Neckbone discover a mysterious island that they had never seen before, and they decide to explore it.  On the island they find Mud (Matthew Mcconaughey) who is a fugitive for the murder of a man who abused his love, Juniper (Reese Witherspoon). Not to Mud’s knowledge, his victim is the son of a major power player of the city, who has formed a posse and are hunting down Mud. Ellis and Neckbone, over the course of the film, are roped into doing many tasks for Mud and getting involved in his schemes.

Okay so let me forewarn you, this section is going to be quite short. There are not many things I like about Mud. I have to warn you one more time, I will be a little biased since there are few “coming of age dramas” that I like. Anyway, the best part of Mud was Ellis. The main character of Mud, he is very mature and confused for his age. Tye Sheridan (who was relatively unknown to me until this film) did an amazing job. What happens to him in the film actually made me sad for him and his character. All he wants is everyone to be happy, despite what he has to say about it.

Mud, in my opinion, is a total piece of crap (except for Ellis). Matthew Mcconaughey’s character is absolutely horrible, which is disappointing since Ellis and Neckbone practically look up to him. He doesn’t do anything to deserve any praise until the very end of the film. The one act almost redeems him for the rest of the film, but not enough.  To keep ripping this apart, the rest of the supporting cast is absolutely horrendous. Neckbone is annoying as hell, the only real reason he is even there is to help push Ellis’s character. Reese Witherspoon’s character, Juniper, was just a total bitch. She looked like she didn’t even want to be in the film in the first place. it was embarrassing for her. I am just going to throw this tidbit in there as well, many of the shots weren’t balanced very well or the exposure was off. Amateurish.