Hello everyone, and welcome to my very first ever Video Game Review! Today I review a game that I’ve actually done a full Let’s Play on My Youtube Channel. 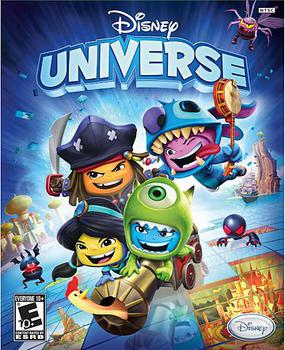 Okay, it has been quite awhile since I have played this game, and even in my Let’s Play of it, i took my sweet time through it! Disney Universe doesn’t really have much of a story to it. What I got from it was we were going to the Disney Theme park, when something happened and our Tour Guide, VIC ( Virtual Information Cube) Turned into his evil self, HEX along with the Cast Bots! Now you must travel through all 6 of the Disney Worlds to save and unlock the other Disney Costumes!

Let’s go over the pros first! Disney Universe has a huge nostalgic feeling for any fan of Disney as you travel through six of the most popular Disney and Pixar films such as Pirates of The Caribbean, The Lion King, Wall-E, Monsters Inc, Alice in Wonderland, and Aladdin! Let’s me be the first to say the soundtrack is amazing here, as the highlight several of Disney’s most popular tracks and staying true the that Disney World! Another thing done right is the amount of costumes you get to choose from! You can dress yourself as 45 different characters from the following six worlds and The Little Mermaid, Tron, Mickey Mouse, Lilo & Stitch, and Tangled!

Now let’s talk about some of the cons! One of the biggest con is that the game drags on way to long! Each World has 3 places in the world you have to visit and each place you have to visit has three levels, so there our 9 levels per world. Another huge problem is the game play. Not that there is anything wrong with it, but its jut not that fun! It gets boring real quick, but one of my biggest gripes with this game is that it calls itself an Action-Adventure game. In my opinion this game is more puzzle than anything, and I don’t mind doing puzzle stuff, but I feel it revolves to much around it!

The game is not bad, just gets boring fast! but if you a big Disney fan like myself, you may enjoy this game! but if your not that into Disney than I would say this game is definitely not for you!

I Am Alive: The Event