Hello everybody! This anime club needs some more Noragami doesn’t it? Well this week we have the second season of Noragami, Noragami Aragato.

The story is about an Underdog God Named Yato and his adventures. This Yato god, said to be a God of War and Calamity, is down to the earth poor and is not very popular and doesn’t even have a shrine for himself. He does any job from baby sitting to evil slaying for a price of just 5 yen. His goal is to become the most popular God and being famous amongst the humans. In the path to achieving his goal, his fate becomes intertwined with a high school girl called Hiyori Iki, who happens to be the only human with the ability to see him. So what Yato does in order to get rich and famous and what all adventures or troubles he gets into in the process with Hiyori Iki is the story. 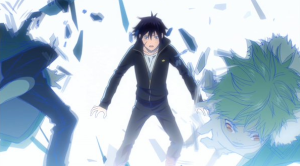 All I can say is that I am so glad that Noragami has returned for a second season, even if it was in the form of Noragami Aragato. I am not saying that I didn’t like Aragato, as it is actually quite the contrary. Aragato cemented my fondness for the series as a whole. This is especially the case for Yukine, as his development over the course of the series is what keeps me involved and interested. Yukine is actually my favorite character in anime at the moment, especially since I could throw Hiyori and Yato over a bridge.

Unfortunately, like with an series that I absolutely adore, it definitely isn’t perfect. My biggest pet peeve with Aragato is all of the cliffhangers. There is almost a cliffhanger and the end of every single episode, and it becomes even more ridiculous in the last three or four episodes. The suspense was even worse than normal, as after I thought the episode was the series finale, the producers would update the schedule to include another episode! This was absolutely frustrating. Before I go too much off of a tangent, I do also want to mention that Aragato is split into two separate stories. While it does actually work in the general flow of the story, I was not personally a fan. We spent way too much time dealing with Bishamon and Yato’s feud where it could have been wrapped up in a three episode arc.

Grave of the Fireflies: Why Do They Die So Fast?