Hello everybody! Today we have a peculiar anime called Legend of the Legendary Heroes.

LEGEND OF THE LEGENDARY HEROES 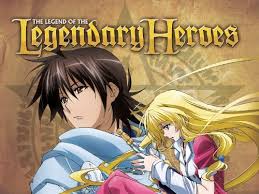 In a land where even common soldiers wield basic combat magic, military academy student Ryner Lute stands as the Roland Empire’s most powerful mage, though one wouldn’t know it to look at him; he’s far more interested in getting in his afternoon naps, after all. He’s also secretly the bearer of the Alpha Stigma, special magical eyes which allow him to instantly analyze and duplicate any magic he sees but which also leave him prone to berserk rages where he can unleash truly monstrous levels of death and destruction. Fellow military academy student Sion Astral, a dazzling leader of men who has ambitions to eventually become king and reign in Roland’s notoriously corrupt nobles, recruits Ryner as a teammate and friend and eventually an employee, too, when Sion does ultimately become Roland’s new king. Together with the indomitable swordswoman Ferris Eris, who is obsessed with dango and falsely accusing Ryner of being the Empire’s biggest pervert, Ryner gets assigned to investigate and hunt down Hero Relics, remnants of a legendary period of great battles which possess immense magical power. As he and Ferris eventually learn, they aren’t the only ones on the trail of Hero Relics, and Ryner isn’t even normal by the standards of the widely-feared Alpha Stigmas, either. Sion, meanwhile, gradually learns that being king and dealing with the Empire’s troublesome nobility can be an ugly, shady business, especially for someone as idealistic as he is.

It does a better job than most of its type of fleshing out its characters, especially Shion and Kiefer (a friend of Ryner’s from his military academy days who plays a prominent role early on and then pops up occasionally in the later stages), and despite some missteps – Ferris’s younger sister Iris. Many characters have ulterior motives, and the fact that it isn’t always obvious which ones do and do not, and what exactly those ulterior motives are in some cases, keeps things interesting. The plot, while not always executed smoothly, is as meaty as anything seen in any fantasy anime series and only slacks off in the bonus recap episode, thus always giving viewers some kind of action to follow. Sometimes the writing does come together with other elements to lend the material an impressive and involving amount of gravitas, though sadly such occurrences generally don’t last too long.

Major events even happen during the closing credits of the final episode and that’s still not enough to shake the feeling that this series was either meant to be much longer or bit off more than it could chew in what it chose to adapt from the novels. As it is, very little gets fully explained or satisfactorily resolved by the series’ end. The other big problem, and one which pervades the whole series, is the erratic tone. In the early stages, and periodically throughout the rest of the series, the content assumes a light-hearted, adventuresome tone which sometimes hints that it might have a dark edge to it but is just as likely to be silly or playful, even at times slapstick. Any complacency about how the series will progress ends with the episode 3, whose beginning uses a severed, blood-dripping head as a prelude to a sudden, dramatic escalation into extremely graphic content later on in the episode. The series isn’t all bad, though.