Hello everybody! Today we have the last game of the Ogre Battle series, Tactics Ogre: Knights of Lodis.

You can check out these links if you want to read my reviews of other games in the series. 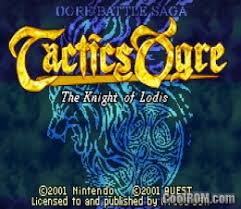 This game is set before the events of chapter five – Ogre Battle: The March of the Black Queen and chapter six Ogre Battle 64: Person of Lordly Caliber and seven Tactics Ogre: Let Us Cling Together which run concurrently.

Ovis is brutally oppressed by the knights of Lodis. Alphonse Loeher is a knight in Rictor Lasanti’s military unit, the Order of the Sacred Flame, and he is sent to Ovis. When he is later separated from the main forces, he meets Eleanor Olato and Ivanna Batraal, two locals from whom he eventually learns the truth about the horrific events taking place in Ovis.

Various circumstances lead Alphonse to separate from Rictor’s main unit. As the plot unfolds, Alphonse begins to question the actions and motives of Rictor. He then begins his search for answers, starting with Ivanna’s uncle, the sinister regent Naris Batraal, and the sacred spear, Longicolnis, which is the only instrument that can pierce the skin of the fallen angel, Shaher. It is later revealed that Rictor initially knew about the sacred spear and wanted to obtain it for the Lodis empire. About halfway through the game, the player is presented with two choices, one of which eventually leads to his falling out with Rictor. In fact, the player’s choice will significantly affect all plot elements that follow.

There are five possible endings in the game (the Game Over scenario, which is gained by losing to the final boss, is also counted). The “A+” ending sequence features one additional scene which details Lans Tartare’s past, in addition to the entire “A” ending sequence. To view the A+ ending, several conditions must be met, including completing the game in under 25 hours. The exact ending sequence with which the game presents the player depends on, among other things, the significant choice that the player has made halfway through the game and Eleanor’s presence in the final battle. In particular, the “D” ending excludes Eleanor altogether.

Tactics Ogre: Knights of Lodis is the prequel to Ogre Battle: March of the Black Queen. Knights of Lodis (Kol for short) is quite similar to Tactics Ogre: Let Us Cling Together, with only a few main key differences. First, the game play includes many of the same elements as ToLuct but shares the rest with Final Fantasy Tactics. It is a turn-based JRPG, which makes it all different from the other games in the Ogre Battle (MotBQ and Polc) saga. Secondly, the class list has been expanded yet again, now to a total of about 100 classes. That is way to many for a single game, but at least now it increases the level of customization. Lastly, The story follows a new character named Alphonse on a completely different continent as a questions the authority of his rulers, uncover the legendary spear Longicolnis, and destroy the great demon threatening the world. Just like in every other Ogre Battle game.

I have to honestly say the Knights of Lodis is my least favorite game in the entire saga. Its not that is was disappointing, I just didn’t enjoy it as much as I hoped. The story didn’t grab me as much as the others, it made me feel like I just had to trudge through it. I did enjoy Alphonse though, he was a cool character (especially since in the A+ ending is an important character in ToLuct!) I felt the graphics could have been better (but it was released on the GBA, so we already know how they screwed that up). Also thought that lack of multiple choices throughout the game that could change the story hindered the game. There is only one halfway through the game, while ToLuct has three.