Hello everybody! Today we have Dreamworks most recent project, Mr. Peabody and Sherman.

Mr. Peabody is a business titan, inventor, scientist, gourmand, two-time Olympic medalist and genius…who also happens to be a dog. Using his most ingenious invention, the WABAC machine, Mr. Peabody and his adopted boy Sherman hurtle back in time to experience world-changing events first-hand and interact with some of the greatest characters of all time. But when Sherman breaks the rules of time travel, our two heroes find themselves in a race to repair history and save the future, while Mr. Peabody may face his biggest challenge yet – being a parent.

Mr. Peabody and Sherman is actually pretty entertaining once you wade through all of the humor for the children. This was a family film done right. I am always interested in time travel films, as I am kind of a history buff. In the film Mr. Peabody and Sherman travel to: France (during the French Revolution) ancient Egypt (where Penny is set to marry King Tut), Florence (where they seek the assistance of Leonardo Da Vinci), and ancient Troy (to stop Sherman from being a soldier in the Trojan War). These nods to history were a nice addition for the older demo in the crowd. There are also plenty of nods to classic films and events throughout history that keep you intrigued. 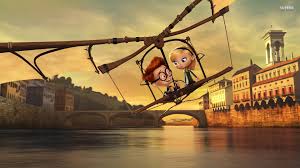 My problem with Mr. Peabody and Sherman was that it had too much stupid kid humor littered throughout itself. I felt that many of the puns and butt/fart jokes could have been removed and the film still could have been decent, perhaps better. The film’s dialogue is lacking when Mr. Peabody isn’t present, but as soon as he appears his banter and wit lights up the conversation. It had so much potential, and it met my expectations.

Guardians of the Galaxy: Marvel’s Other Superhero Team